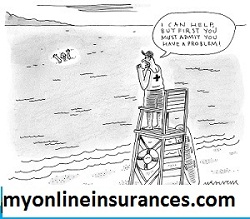 Bank misrepresents consumer putting insurer at risk. The bank is making an excess profit out of ignorance consumer’s expenses and putting the insurer at risk especially in the underdeveloped nation. There is a lack of the law and regulation to govern the bank activity.

The freight forwarder besides handling the logistic of the client’s cargo, also,  advises the purchase of marine insurance. Batu Pahat manufacturers imported textile cotton yarn from Taiwan and Pakistan.  Export the garment and knitted apparel to Europe and North America respectively via Singapore port.  When the import shipment arrived at the port,  after the customs’ inspection, the FCL was then break bulk into 20′ or 40′ lorry before conveyance to its destination.

One need to have the bill of lading, invoice, packing list, insurance policy and the customs’ form for customs declaration purpose. I often noticed that there were 2 insurance policies enclosed.

I later found out the reason for 2 policies coverage for the same consignment.  When the bank issued a letter of credit. It also helped customers to buy the marines policy. The 1st policy was to cover for the sea voyage and the 2nd policy for inland transit after Singapore customs’ clearance at the destination, the local practice for years.

One importer purchased mainly on Fob term, there was another policy from a local insurer to cover the inland transit. It protected her shipment from accident damage. She did not want to repeat the same ill fate as her elder brother.

The electronic part imported from Taiwan totally damaged at the midway to the factory. The insurer repudiated his claim stating the coverage only up to port only, and not to his factory.

” This is weird, I am sure you know XYZ company, we pay the full claim for the electronic part that accidentally damaged at the highway,” I explained to my potential client.

” Oh… you are only to handle the marine insurance for them. When are you free to drop by my office to discuss the cargo insurance?”

If you buy on a CIF term, it is fine with the same insurer for 2 separated policies. Buy on FOB term, there is a foreign insurer to cover the sea voyage. The local insurer has a disadvantage covering the inland transit. Who knows if there is any invisible damaged during the sea adventure.  The best advice to have the cargo thoroughly examined before loading.

There is a charge of opening a letter of credit, another 2 insurance premiums to pay. Thus the bank is making an excess profit out of the client’s ignorance.

I advised all my clients for both the importer and exporter for CIF term. The “Warehouse to warehouse clause” must insert into the policy.  It must an All risk or ICC “A” to protect themselves, It is also a win-win situation for both insured and insurer. It saves a substantial amount of insurance premium. Also, it is much more convenient to deal one insurer and not two. No more any finger-pointing when a claim occurs.