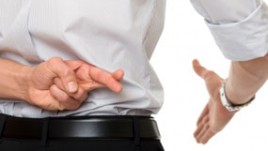 Utmost Good Faith Binding Between Insured and Insurer Part II. What is Fraudulent Misrepresentation? It is also known as Concealments.

Concealment is closely related to misrepresentation—it is the failure to disclose material information. However, before an insurance company can deny payment for concealment it must prove:

Misrepresentations and concealments are common strategies used by people with higher risks and lead to adverse selection by insurance companies, which, in turn, raises premiums for everyone else.

In Brief, it means that the insured ought to disclose all the material fact to the insurer whether to accept or reject the risk. The insured purchased an insurance policy has the intention to cheat the insurance company. Those high moral hazard insured resulting into a lot of bad or fraud claims that will eventually lead to insurer rises up the premium across the spectrum of all insured. Which is unfair to the consumer, like in the case of third party motor insurance.

I remember a case vividly more than 2 decades ago.  I befriended with a young lad who family running a few types of business in a booming town.

One day ” Jamin, since you a newbie in the corporate marketing in general industry. I would like to introduce one of my brother who is operating a hotel here.” he asked me.

” Ok sure, so kind of you, Mr. William, I am sure to give the utmost support to your brother’s hotel business.” I politely reply him.

During our meeting, after a few casual chats. We started our serious business. After all the smooth presentation with question and answer. We closed the deal.

In the fire proposal column ” Have you ever suffered any loss or made a claim on the risk now proposed or any other risk owned by you whilst trading in the above or any other named? if yes, please give details of the claims.

After issued a cover note and the cheque being collected I bid him goodbye. My sixth sense was telling me, something was not right.  So easy to close the deal with just one meeting.  Very Suspicious. My mind was pondering with a string of unsolved puzzle. The brother accepted all the term and condition so quickly and with no questions asked.

Upon reaching the office, scanned every detail of the insured’s documents like the form 24 and 49. The was the finding:

XYZ, the previous hotel was located on the present WWW with the same address. The fire completely destroyed the old hotel. The reason was due to arson based on the adjuster’ report.  The earlier insurer paid the full settlement of the fire claim.

Why the insured change the insurer even though, the company received the full payment.

The insured Mr.Robert named was not in form 49 in the current hotel that he is managed.

After much consideration, I informed the insured with letter thanks for supporting our company, but,  however, we have to decline his offer plus a full refund of the premium.

We rejected the risks due to the following:-

The previous insurer really had turned down the offer by the insured. How high moral hazard plays a significant role in the insurance industry in my next post.