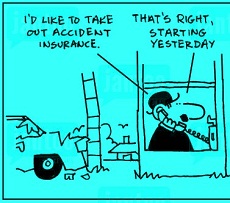 Conman Gets Full Insurance Claim Settlement? It is a conman world. Smart Conman trying to cheat insurer for million of dollars fraudulent claim.

Is it easy to cheat insurer claim money? A True story how did the conman cheat the insurance company.

Garment factory requires a lot of labor.  It is a labor-intensive industry,  Malaysia is now losing the edge to Cambodia, Vietnam, China, and the India sub-continent.

Fire engulfed an export based garment factory in the wee hours of the morning in a small town. The whole building with the contents turned into ashes, only the skeleton structure building remained behind. Thank God, no injury reported.

The next morning, the owner of the factory enjoying the buffet breakfast in a newly open business class hotel. They looked calm as if nothing happened.

“Did you know that your factory was burned to the ground? A group of reporters asked the couple.

“Yes, I know, what can we do, nothing, let the insurer deal with it”. the couple calmly answered the reporters.

“What is the estimation of loss.”

“A few of million dollars”

The preliminary local adjuster report totally coincided with the Bomba report.  A short-circuit was the main reason that fire broke out.

The insurer seemed the case as hanky-panky. A foreign adjuster arrived to gather the sample of the ash. A day later, he was found in the police lock up for the trespassing private property. Who called the police? It was none other than the owner couple.

When a claim was reported, the insured right has transferred to the insurer. The insurer’s adjuster has the right to entering the insured without the prior approval of the insured.

The local insurer bailed out the foreign adjuster.  Later on, a forensic report confirmed the fire broke out due to arson. All the ashes contained a trace of kerosene. Kerosene carpeted the whole building. Who was the culprit? If it is a malicious damage by the third party, the fire insurance will response.

Laugh to the Bank

Full settlement cheque was above to issue. By the twist of fate, the conman couple will laugh all the way to the bank. But it was not materialized.

A further investigation revealed that the oversea buyer rejected a shipment worth half million dollars. Reason being poor workmanship and not up to specification. The seller is bound to pay the ocean freight and other expenses incur. Since it was a branded shirt with the company logo, it is very difficult to dispose to the foreign market.

It was a partial shipment of the whole letter of credit. It can only to sell at the night bazaar as a rejected stock with 1/4 of the full shipment price. A loss of 375 000 dollars.

Like a lurid drama, a team of the financial expert to revealing financial standing of the ill-fated company. The confirmed letter of credit used to apply for pre-ECR (export credit refinancing with 4% interest per annum) from a local commercial bank.  It had successful obtain 80% of the letter of credit. Is it a conman world?

The final truth the local adjuster and local authority had the coffer full by the conman couple. They also paid the underground to set arson of the building hoping the insurer will pay the over insured. Normally conman often over insured their property, it is a high moral hazard to the insurance industry.