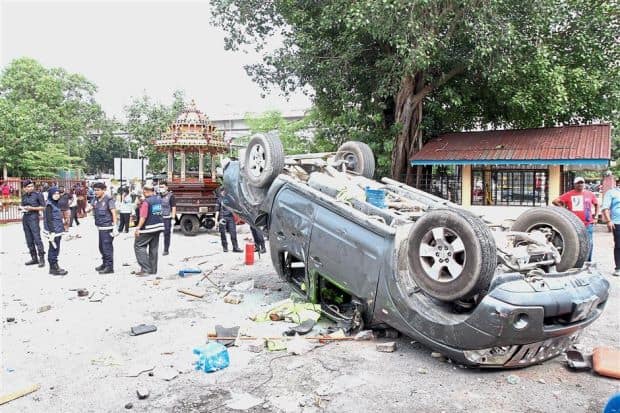 Temple Riot How to Protect your Property from being Damages?

Recently, the Subang Jaya Hindus temple riot shocking and terrified the whole world with prominent coverage by the mass media. The churned car piling on the eerie silence road aftermath had alarmed the public. How to safeguard their private property?  Contrasting, 2000 mobs rioted on the Hindus temple caused horrendous massive traffic on a standstill that stretching for miles. The hiring of the professional thug, would anybody can self-defences against them? Of course, the most sensible is to flee for your own safety. But, nevertheless, how shall we protect our movable and immovable chattels? Temple Riot, how to protect your property from being damaged?

Riot in a nutshell.

Malicious Damage covers the non-fire damage acted by an individual person acting out of personal malice as opposed to a large group. Nevertheless, the riot coverage formed part of malicious damage.

Virtually, a malicious person with the sole intention to damage your property e.g. like spraying acid or paint.

A malicious act caused by anyone committed during a disturbance of the public peace resulting in the physical loss or damage yielding a fruitless result. Who is the victim? Often the public needs to pay a high hefty loss of money and endless emotional damage. Loss caused by sabotage and terrorism with the use of force or violence. Regardless the purposes could it be political, religious or ideological motivated with the intention to influence any government and/or to put the public in fear for such purposes.

How to protect our property from riot?

Regardless of your social status in the community, when a disaster strikes on your house, indeed a misfortune, so, how shall we overcome? Depend out a handout from the concerned authority or seeking a public donation. Notwithstanding, Self-help is a wise idea.

Having said that, the preferred solution by examined closely your fire or householder or house owner policy. Finally, contributed an insignificant sum of premium and have a peaceful mind. In the end, an insurer shall pay any physical damage or loss due to riot provided strike, riot and malicious damages inserted as an extension clause. Terminated the countless sleepless night and pointless to save a penny, ultimately, you lost an arm and leg when a riot occurs.

Let put a scenario, an exporter stuffed their produce in the FCL, as the space constraints in the factory premises. The container parked by the side of the public road in front of the premise, within the view of the 24 hours security guard.

Well, in another case, an importer due to the closing of unloading bay was full, after 6 pm, the workers had gone home for the day. Consequently, on seeing this situation, the haulier company left the FCL container on the opposite of the road.

If the rioters damaged part of the consignment cover under ICCC “A” clause for both cases, will the insurer repudiate the claim?

What about land transport like car, low-loader, forklift. Excavator, motorcycle, Is riot cover such movable automobile?.

A riot occurs, how we can protect the merchandise from riot? How shall we deal with kind of situation, Reader, please share your view and comment!. Humbly, I sincerely appreciated your time for writing your view or comments. Let us share the knowledge in this forum together.