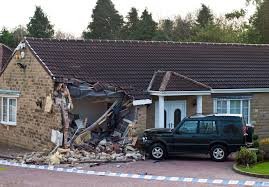 Impact Damage by Insured’s Own Vehicle. Is it payable? What shall we do? Claim own car insurance? No NCD on renewal? Repair own car and own house out of own pocket?

Wee hours of the morning

A loud “Bang Bang” disturbed the eerie silent moonshine night.An elder couple drove tiring over an hour drive after attending their relative’s wedding reception in a posh hotel. His forehead oozing out a lot of blood, his white shirt turned into blood red. His wife with her broken arm crying her daughter for help.

After crawling out from the vehicle, the strong impact had demolished the front auto gate, his car rammed right to front broken brick wall. The main hall partially damaged, with broken glass scattered all over the main hall.

” Oh my God” Lina wake up!” the couple shaking their daughter vigorously, to no avail. Lina and her friend were lying motionless in a pool of fresh blood.

They hurriedly called the ambulance, it arrived 15 minutes later. The paramedic rushed four of them to the hospital. Fortunately, their younger son was in the back room, found sound and unhurt. He startled to see the messy hall. At sixes and seventh, wondering what the next course action to take. Such a freak accident does happen most public would panic.

Take pictures of the scene

Insured had to make a police report immediately. Try to mitigate the further loss by guarding the house content being robbed. Go through the fire or house owner or householder policy to see whether the policy has an additional peril for Impact dagame by insured’s own vehicle.

There is only a deductible of RM 400 for the impact damage by insured’s own vehicle. The auto gate and brick of the main hall and part of the damage wiring system, door and lock cost about RM50 000 less Rm 400 deductible thus the insured can claim up to RM49 600

The Elder couple and his daughter.