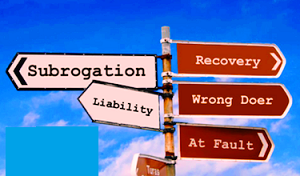 Insurer Don’t reveal The Waiver 0f Subrogation Clause. The majority of the agent do not practice or have no knowledge how to use it to protect their client interest.

My client called me to read the letter from a lawyer.  The company had been sued by his own brother’s company insurer.

“My brother company logistic manager asked me to help them to convey a consignment of expensive tile to Port Klang, along on the  NS highway, the lorry met an accident. The vehicle was sandwiched between 5 vehicles, badly damaged the whole consignment. No salvage available. His company claimed his own Good In Transit insurance. After settled the claim one month later, I received this letter to compensate for the insurer loss, otherwise, they would seek legal action against us.

” Did you call his insurer for any clarification about this issue.” I probed further.

” I did not call, as I think after that, my younger brother would not do that. Now I really don’t understand why he did that to me. Moreover, I had a few cases using the subcontractor truck to convey my goods. After the claim had settled, the wrongdoer did not receive any letter to compensate my own insurer”

Both brothers were log headed with other now due to this incident.

“Do you have your younger brother contact number. Can I call him? I requested.

We made an arrangement to meEt each other in the presence of his elder brother.

“Did you sign any letter before the insurer would make a payment to you.? I asked his younger brother.

“Yes, I signed, here is the photocopy of the insurer letter.” he answered me.

“This is a subrogation letter, did you agent explain this to you?”

“Yes, he said no signature, no payment”

“Can I see your insurance jacket?” I asked the younger brother.

“What should we do now?”

I told the young one to write a letter to insurer waiver of subrogation stating the full reason for it. It is up to the insurer to decide any further action against the older one.

A waiver of subrogation is a contractual provision where one party agrees to limit the rights of its own insurance carrier and usually pays an additional premium for a special policy endorsement allowing for coverage under such a situation. Many construction contracts and leases include the waiver of subrogation clauses. Such provisions prevent one party’s insurance carrier from pursuing a claim against the other contractual party in an attempt to recover money paid by the insurance company to its insured or to a third party in the resolution of a covered claim.

This clause can be inserted the landlord and tenant policy.

The past chairman of Pan Lorry Association of Malaysia invited me to Kuala Lumpur had a seminar with the members on how to the waiver the subrogation in their Good In Transit policy.